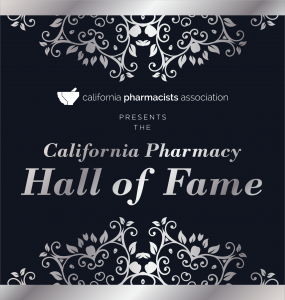 California pharmacy’s highest honor is being inducted into the California Pharmacy Hall of Fame. In 2021 we celebrated the 25th anniversary of the Hall of Fame with a spectacular banquet. CPhA is soliciting nominations now for the 2022 class of inductees.

Inductees will be recognized on April 23, 2022 during Western Pharmacy Exchange at the Mandalay Bay Resort and Spa in Las Vegas, NV. 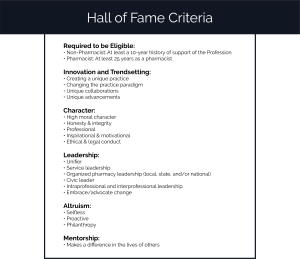 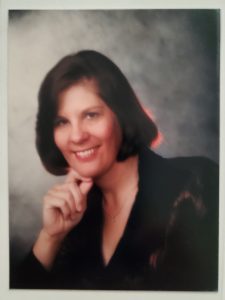 Colleen Carter received her PharmD degree from the University of the Pacific School of Pharmacy. She was an active member of SAPhA.

She has been awarded an Alumni Fellowship and Alumnus of the year by the University.

Dr. Carter spent 33 years with Longs Drug Stores, Inc. as staff pharmacist, pharmacy manager and trainer for pharmacy technicians and new pharmacy managers. She was also involved in store acquisitions in Las Vegas and Beverly Hills and helped with many store openings. Longs awarded her with the Pharmacy Manager of the Year. She also worked for Walgreens and UC Santa Barbara Student Health Pharmacy.

In her spare time, Colleen returned to the track. She officiated in high school, NCAA, national and international competitions, including 4 Olympic Trials and 2 Olympic Games. She was the first woman name honorary referee of the Santa Barbara Easter Relays. She also received the honor of Official of the Year from USATF Southern California, Santa Barbara region. 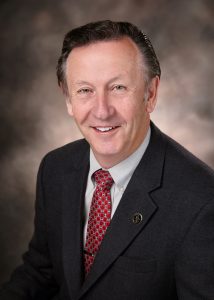 Steve’s 40+ year professional year passion is to serve patients and their communities by Expanding and Enriching the Scope of Practice for pharmacists.

His career focuses on Government and Professional Affairs. He had responsibility for pharmacy law advocacy and compliance for a National managed care organization. He has played a key role in pharmacy law innovation and evolution for over 40 years. This included use of computers in pharmacy, establishing CDTM practice, Central Pharmacy innovation and SB 493 that substantially expanded pharmacists’ scope of practice, established the Advanced Pharmacist license (APh) and Provider Status for all California pharmacists.

Steve has a PharmD from USC and a JD from Northrup University. He is a licensed California pharmacist and attorney. He has been very active in pharmacy legislative and regulatory affairs for over 40 years and a well know participant in Board of Pharmacy meetings.

He holds healthcare executive certifications from USC and UNC, Chapel Hill. Steve is an Instructor for Pharmacy Law and Ethics for the University of California San Diego. Steve has been a faculty member and guest lecturer for several other California Schools of Pharmacy. He was the featured speaker for KGI’s White Coat Ceremony. He has been an invited speaker for the Oregon, Florida and Texas pharmacy organizations.

In addition, he is a Past President of AMCP, the national organization of managed care pharmacists, for which he has been a presenter and a Keynote moderator at its national and international meetings.

Steve was honored by CSHP as its Pharmacist of the Year and a Lifetime Membership. He is the current President of the Institute for Pharmacy in the Public Interest (IPPI). 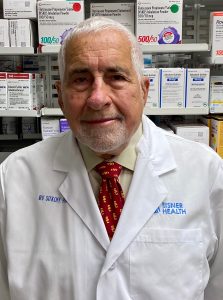 I’m married with four grown children (the youngest is 61!) and twelve terrific grandchildren, and seven great grandchildren. I grew up in Los Angeles and did my prepharmacy at LACC. I immediately enrolled in the first PharmD program at USC and graduated early in January 1954 the first PharmDs.

I received my working and managerial experience in several pharmacies, mainly the Ace and Roxy Rexall Drugs. Early on, I decided to become an independent pharmacist and operate my own pharmacy. In March of 1962, I was able to buy the Florence Owl Rexall Drugs in the community of Florence, and through luck and sweat turn it into the pharmacy I always dreamed of. We became a health center through certification in ostomy and wound therapy, diabetes, DME, basic orthopedics, wherever we could help, council, behavior modify and improve our patients. Over the years I configured the store to achieve these goals with bubble paks, private consultation and fitting room, patient teaching.

I was greatly helped by my wife and Millie Kwan, RPh. They helped me through several major changes. At the same time, we helped improve the community from being a major force in the Florence-Firestone Chamber of Commerce to contributing time and energy in various community improvements from Model Cities, the “Enterprise Zone,” the “Empowerment Zone,” Sheriff’s bicycle patrol, B.I.D., Sr. Citizen Center, Adopt a School Programs, and Headstart.

At the same time I bought the store, I slowly became more involved with our state and national pharmacy organizations. North and Southern Ca. Pharmacy Association becoming CPhA., NACP, APhA, and ACA. They all had their place, especially CPhA. We were even the depot and developed a drug formulary for the Flying Samaritans helping take care of patients in several towns of Baja California. I was close to USC Pharmacy volunteering as an Adjunct Professor and Preceptor – mostly under Mel Baron.

During the Civil Unrest in 1992, my pharmacy was destroyed, but my Rx files were saved by a computer tape backup. We took care of our patients by shifting to filling and delivering Rx’s with the help of Harold Washington, Sr., PharmD at his Bevins Pharmacy expedited by Millie Kwan, RPh. I worked, planned and with much help was able to open a temporary location half a block away in 12 days well stocked and Ok’d by the DEA and accredited by the Board of Pharmacy. We alway helped and pushed our personnel to achieve and go for their dreams.

A local student in the area came to work for me when he was 16, continued through the USC School of Pharmacy and bought my pharmacy when I was 70 in the year 2000. Helped out there for 6 years, worked part time at a few pharmacies, and Mel Baron was instrumental in asking me to help out and set up Eisner Pharmacy in the Eisner Ped. and Family clinic, now known as Eisner Health. It’s a wonderful place to work and I’ve been there 11 years part time except for the Covid Pandemic and am back working again for one of the best PICs and pharmacy administrators Nicole Alton, PharmD.

During the last 10 years, our local pharmacy association had some hard times. We were able to combine Santa Monica Bay, South Bay, Hollywood-Wilshire, and Central LA Pharmacy Associations into one strong one. Greater LA Pharmacists Association with the help of CPhA, and Jon Roth, Marshal Abdullah, Janice Cooper, Jerome Mo, Kathy Besinque, and especially our current president, Gail Orum, were instrumental in helping make GLAPhA strong.